Animation is a key component of creating engaging UI experiences. Adding flare with motion and color can transform an HMI from something dull and lifeless into something polished and appealing. The term "animation" covers an extremely broad spectrum of disciplines and mediums. Not only that but the way that two animators approach a task may be very different while yielding similar results. In developing Incari, we have been very mindful of this fact and have supplied a variety of different methods for breathing life and character into static assets.

Using the new Remote Projects section of Incari Hub, we can now provide downloadable projects, which you can play around with to see how certain functionality is implemented in Incari Studio. The first of these mini-projects focuses on the 4 different approaches to animation, which can all be combined together based on the project requirements.

To download the project now, open Incari Hub and download the "Animations" project from the Remote Projects section.

If you go back to the My Projects section, you will see that the project was added to your local files. If you hover over the project thumbnail and press the ▶ (play) icon, you can preview the project.

Now you will see a variety of controls for each of the 4 animation methods.

If you open the project from Incari Hub by double-clicking it, we can begin to break don each animation method one by one.

Within the Asset Manager there is a file called "TimelineAnimation.incani". Files with the .incani file type are keyframe-based timeline animations, created using the Animation Editor, which should open automatically when double-clicking on the asset.

If you expand the Animation Block called "Logo Animation" and its Transformation Attributes you will see that both the Z Position and Z Rotation are highlighted in blue. This indicates that these Attributes have some Keyframes saved on this Animation Block.

By selecting these Attributes using Ctrl + LMB and then clicking the "focus" icon highlighted above, we can see the animation, represented as Bezier curves.

A keyframe in the consists or two parts:

To add a keyframe, simply right click an Attribute and select "Add Keyframe" from the context menu. This will create a keyframe at whatever time the playhead is currently on. You can then adjust the curve handles to fine-tune the intermediate frames.

If we take a look into the Logic Editor, you will see that controlling animations is fairly simple. When you play an animation using the Play Animation Block Node, an Instance ID is generated. This is a unique id number which Incari uses to identify which animation you want to stop or pause. If this sounds confusing, don't worry. Just be aware that in order to use the Stop Animation and Pause Animation Nodes you must tell these nodes which animation should be affected.

Interpolation is a slightly more complex approach to animation. Unlike some of the other options, it is achieved with the Logic Editor alone, using the Interpolate Node. What this does is calculates the intermediate values between an initial and target value over a set amount of time.

In the example provided in the demo, you will see that each button graphic's On Mouse Click event triggers a sequence of logic. On all three of the buttons, both of the Interpolate Nodes are reset, to make sure that we don't trigger an interpolation, while one is already in progress.

The play forward and play backward buttons have a third Pulse that calculates the interpolation between the current and target opacity values of the logo. Here is a brief overview of the Attributes of the Interpolation Node:

Data Type - The numerical data type which will be interpolated.

Duration - The length of time between the start and end of the interpolation.

From - This is the value at the start of interpolation. In our example, we are using the current opacity value of our logo as a starting point.

To - This is the value at the end of the interpolation, which in our example, is either 1 or 0.25, depending on which button was pressed.

Type - This is the method that the Interpolate Node uses to calculate the intermediate values. These are similar to those found in many other software and programming languages. A good reference for interpolation types is easings.net.

Mode - Whether the interpolation will be performed once, repeated or alternated.

Although Incari's built-in tools are powerful, there are many use cases where the desired effect can't be achieved using Incari alone. In this case, it often makes more sense to create animations in dedicated animation software. Most tools, such as Adobe After Effects, provide an easy way of exporting an animation as an image sequence, most commonly in the .png file format. By using Incari's Image Sequence Object and Nodes, we can take these frames and combine with Incari's logic system.

In the Asset Manager of our demo file, you will see a file called "Logo Animation.incseq". Files of the .incseq type are Image Sequences. To open the file, simply double-click it and the Image Sequence Editor will open. Here you can see all of the images of the sequence arranged in order.

Controlling Image Sequences from the logic is fairly straightforward. If you take a look in the Logic Editor of the demo scene, you will see that there are three main nodes for playing, pausing, and stopping the playback of the Image Sequence.

Actions are a set of Nodes designed specifically for animation. In the Toolbox you will see a number of different actions which affect the transformation properties and opacity of Objects.

The names of these Nodes offers insight into what the Node actually does and which Attribute is affected:

Additionally you will notice three types of actions:

FromTo = Both the start and end value are set manually

To = Only the target value is provided

Looking at our example logic, you will see that the logo graphic is moved to a different position depending on which button is pressed. There are also four easing types, defined in the Interpolation Attribute for sine-based and linear interpolation. 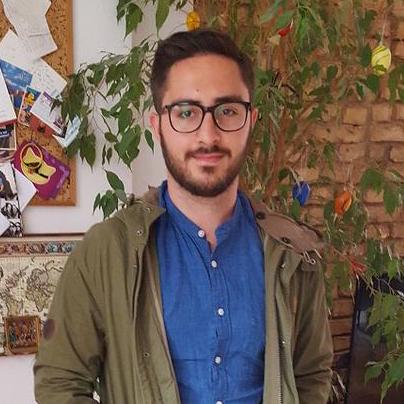